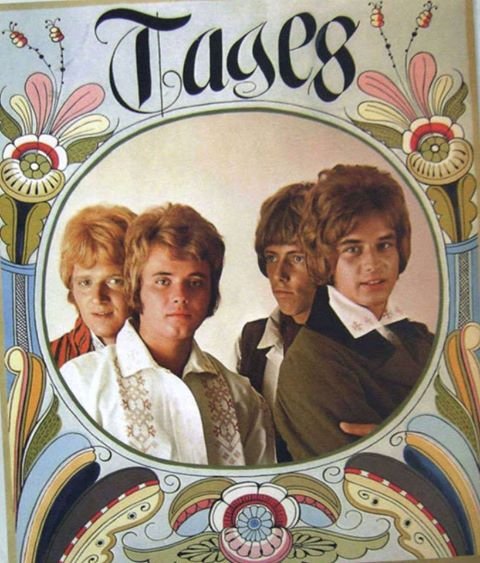 Dan Tage Larsson was born on 11 January 1948 in Gothenburg, Sweden.He became interested in music at a young age,
and started partaking in piano lessons once a week. During this time, he became acquainted with Göran Lagerberg who attended the same school.
Larsson quickly became bored with the piano lessons as he thought the teacher was ”extremely boring”.
Instead, he picked up the guitar and doubled the lessons to twice a week.
His parents also bought him a drum kit as a birthday gift and he quickly started playing that as well.[2] He then played in his first group,
East End Jazzband, eventually meeting guitarist Anders Töpel in Kullavik.

During the summer of 1963, when Larsson was only 15 years old, Töpel invited him to join Alberts Skiffelgrupp,
which at the time only consisted of him and Tommy Blom. At the time, the group was caught up in the skiffle craze,
and as a result, Larsson suggested they invite Lagerberg to play the washboard.
After they became a quintet, a name change was quickly proposed.
They decided to use one of the members’ middle names as a band name.
Töpel’s middle name, Per-Inge, was ruled out as it was considered ”too lame”, as was Lagerberg’s Bertil.
This left only Larsson’s middle name, Tage, as a viable alternative.
Larsson, whose middle name had been taken from his father, accepted this. The group members all agreed that this was ”perfectly lame”,
and stuck with the group, eventually becoming Tages Skiffelgrupp.

Larsson (middle) performing with Tages in 1966
For the rest of 1963, the group played skiffle, but by Christmas of that year,
the group decided to follow in the footsteps of Beatlemania and become a beat group instead.
After recruiting drummer Freddie Skantze, Larsson signed a contract for an electric guitar,
which would become his primary instrument for the remainder
of his career in the group.[7][8] Unlike many other Swedish groups, who had one lead singer,
the members of Tages were each was allowed at least one lead vocal per show, often harmonizing.
This included Larsson, who often would get lead vocals during primarily rhythm and blues numbers.
Larsson, together with the band, achieved nationwide fame after winning a contest in Liseburg called Västkustens Beatles,
in which Larsson sang harmony parts and generally played a larger part in.